Can the public ever get enough images of John F. Kennedy?  If buying a lot of five x-rays of the former President’s groin is any indication, the answer may be no.

As many now know, John Fitzgerald Kennedy struggled his entire life with health problems. Addison’s disease, which he and his political camp repeatedly denied Kennedy suffered from, was one of his greatest physical challenges.

Two X-Ray images taken by Harley Laboratories in London on Oct. 2, 1947, and released by Julien’s Auctions, shows John F. Kennedy’s pelvis and lumber spine at the time when doctors gave him the news he had Addison’s.

In 1947, as a young congressman, Kennedy collapsed in London. Sir Daniel Davis, Kennedy’s physician in London, took X-rays and ran diagnostic tests.  After reviewing these tests he promptly diagnosed Kennedy with the disease then told Kennedy’s family friend, “That young American friend of yours… he hasn’t got a year to live.”

Kennedy personally carried back these X-rays to the United States aboard the Queen Mary.

Damage to his collapsed lumbosacral spine is evident to many doctors as was the case when these were first presented., as is residue of pantopaque contrast medium used in earlier studies to examine the space around his spinal cord. 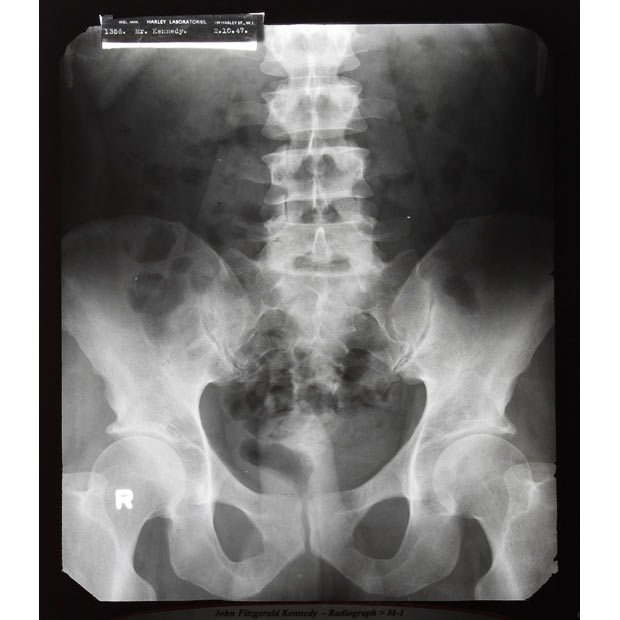 
This is the second image of a 1951 study of Kennedy's spine.. source