Two views of Marilyn Monroe's head in x-rays and other medical images.

Beverly Hills, California - October 8, 2013
Marilyn Monroe, one of the world’s most celebrated actresses and famous icon of Hollywood remains as popular today as she was in the early 1950s. With her eye-catching looks and perfect figure she was the epitome of Hollywood glamour, seduction and beauty.

While the questions still persist to this day, Julien’s Auctions offered a rare collection of Marilyn Monroe x-rays that they claim will clear any doubt of Monroe’s early plastic surgery procedures and cast new details on the actual procedures that would have transformed the film beauty.

The file includes X-rays and doctors’ notes from the office of Dr. Michael Gurdin, M.D. and the X-ray office of Drs. Conti and Steinberg. Dr. Gurdin’s chart on Monroe begins on July 14, 1958 and lists the patient as Marilyn Miller with addresses in New York and Los Angeles. The chief complaint listed in the records is “chin deformity” and goes on to give a medical history that begins in 1950 and ends in 1962.

Listed are a 1956 bout of Neutropenia in England; 1957 ectopic pregnancy in New York and a 1950 cartilage implant in the chin that the doctor observed had slowly begun to dissolve. Those with knowledge of the implant procedure have explained that this was done in association with a tip rhinoplasty, a procedure involving the tip of Marilyn Monroe’s nose only.

The last entry of the medical files is dated June 7, 1962, and reports a fall at between 2am and 3am resulting in swelling and tenderness of the nose. Monroe was brought to Dr. Gurdin by her psychoanalyst Dr. Ralph Greenson. She was then referred to Drs. Conti and Steinberg for X-rays. Her alias during these visits was Miss Joan Newman and that name appears on the paperwork with Monroe’s Brentwood home address. Included in the file are six X-rays including frontal facial bones X-rays, a smaller X-ray that is a composite of the right and left sides of her nasal bones and four small dental X-rays into the roof of Monroe’s mouth, looking upwards toward her nasal bones.

The conclusion written by Dr. Conti and dated June 7, 1962, was that there was no damage to Monroe’s nose due to her fall although a more recent evaluation of the same X-ray indicates a very minute hairline fracture of this bone. Monroe had turned 36 less than a week earlier and the following day Monroe was fired from the film “Something’s Got to Give” (20th Century Fox). 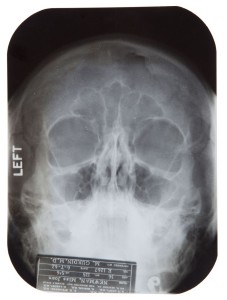 
Image: Reuters
A radiologist's notes determines there was no damage to Monroe's nose, but a recent evaluation of the X-rays found a minute fracture. source


Image: Reuters
Dr Michael Gurdin's notes were first drawn up in 1958 when the actress complained about a 'chin deformity' and the note listed her married name, Marilyn Miller. She was married to playwright Arthur Miller. source