Two views of Ronald Reagan's assaination attempt with x-rays and other images.

"Shots fired" were announced over the Secret Service radio network at 2:27 p.m. Ronald Reagan, America’s President at the time had been shot.

The Secret Service uses codenames and at the time, news immediately spread within the ranks that agents in the limousine “Stagecoach” were taking “Rawhide” away.

At first, the American public did not know that their President had been shot, and in fact the agent with Reagan stated that "Rawhide is OK...we're going to Crown" with was code for the White House.

Ronald Reagan was not okay, however. In fact he was in great pain from an assassin’s bullet hitting his rib. At the time, the President believed that the rib had cracked when the agent had pushed him into the limousine. Even while the agent was checking him for gunshot wounds and Reagan was coughing up bright, red blood, the President believed that he had cut his lip.  At that point the agent immediately ordered the motorcade to divert to nearby George Washington University Hospital and the limousine arrived there less than four minutes after leaving the hotel.

Although a stretcher was requested, the hospital did not normally keep one at the emergency room entrance. Reagan insisted on walking and entered the hospital unassisted, but soon complained of difficulty breathing. At that point his knees buckled, and he went down on one knee.

The Official Physician to the President arrived at the hospital believing that the president might have had a heart attack. He insisted that the hospital's trauma team, and not he himself or specialists from elsewhere, operate on the bleeding man as they would treat any other patient. When a hospital employee asked an aide for the patient's name and address, he stated "1600 Pennsylvania" and at that point the worker realized that they were about to work on the President of the United States.

The team cut off their patient's "thousand dollar" custom-made suit to examine him. This has been reported as angering Reagan. Reagan’s systolic blood pressure was 60 versus the normal 140, indicating to everyone that he was in shock. Some in the room knew from experience that most 70 years-olds in the president's condition did not survive. They immediately treated him with intravenous fluids, tetanus toxoid, oxygen, and chest tubes. The agent who brought him in at that point still believed that he had cracked the president's rib.

In one of the most famous lines of his life, Reagan announced when his wife arrived in the emergency room, "Honey, I forgot to duck". It was a line he borrowed remembering boxer Jack Dempsey's line to his wife the night he was beaten by Gene Tunney.

While intubated, he scribbled to a nurse, "All in all, I'd rather be in Philadelphia", then taking an old W. C. Fields' line.

Within 30 minutes Reagan left the emergency room for surgery with a normal blood pressure. The hospital’s chief of thoracic surgery, Benjamin L. Aaron, made the final decision to operate due to the continual bleeding and the x-ray shown above.

In the operating room, before finally going under, Reagan removed his oxygen mask to joke, "I hope you are all Republicans." Ultimately, Reagan lost over half of his blood volume both in the emergency room and during his surgery. The operation was reported to last about three hours.

His post-operative time was complicated by fever, but the biggest complication or annoyance may have been that Reagan "entertained his nurses all night with jokes" instead of resting.

Picture: AAP Source: News Limited
Photo of President Ronald Reagan believed to have been hit by a bullet on March 30, 1981. source 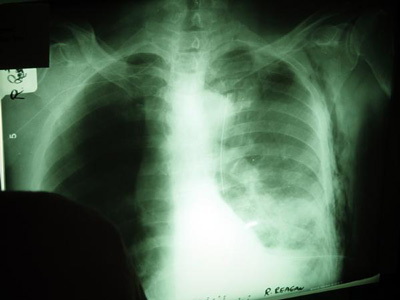 X-ray of Ronald Reagan's chest after an assaination attempt showing the bullet lodged a half an inch from his heart.


Visitors at the Ronald Reagan museum can see the X-ray negative of Reagan's chest on display. source