Views or Angles of Mammograms

This topic has two different ways of being answered. The first is about the different angles or views that mammograms capture. The second way is how the mammogram image is actually taken - the technology of the machine taking it. You can find information about that here.

What Are The Different Angles or Views in Mammograms or Mammography?

Most doctors will order 'standard views' for routine screening mammograms. There are 4 of these standard views and these are usually used for all routine screening in patients. However, not all four views are always performed in all mammogram studies. For instance, with women under 40, only two views may be done to limit radiation exposure. In cases of a recent surgery, reducing imaging may also be appropriate. In other instances, where something has already been detected in a breast, multiple views of that specific area might be needed. However, these are the four standard views used most. 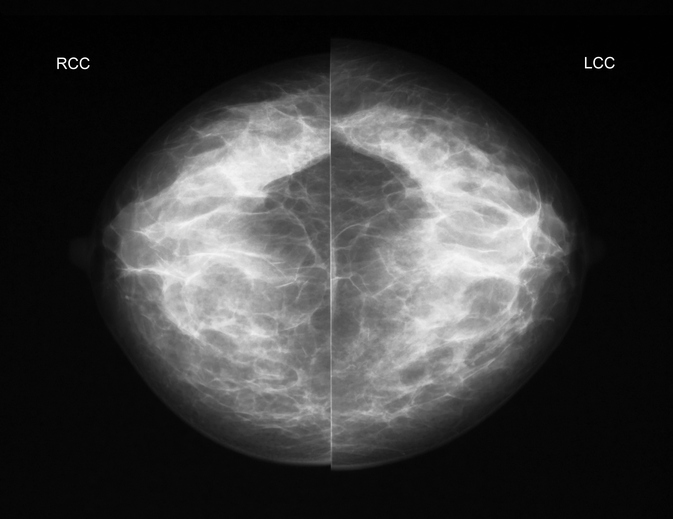 Cranialcaudal, sometimes also referred to as Cranial Caudal or CC, is a view of the breast taken directly from above. It is probably the most common of the standard views taken during routine-screening and diagnostic mammography. From the top looking down, the entire breast is depicted. In a quality CC view, the entire breast parenchyma (glandular tissue) should be depicted. The fatty tissue closest to the breast muscle should appear as a dark strip on the x-ray and behind that it should be possible to make out the pectoral (chest) muscle. The nipple should be depicted in profile. 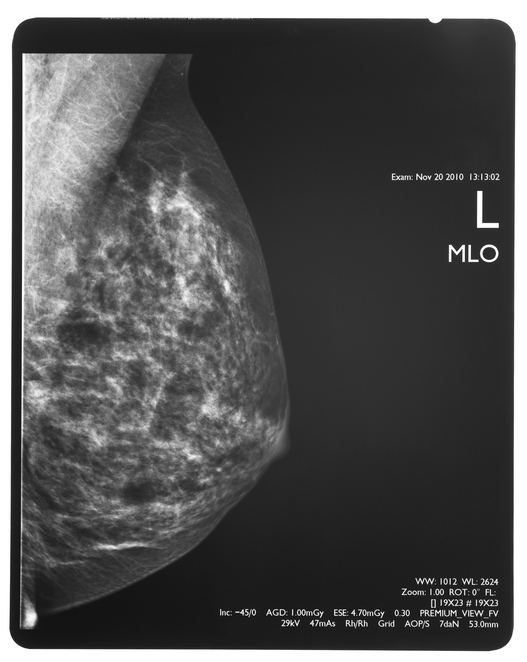 The mediolateral oblique view or MLO, is taken from a above much like the CC view. However it is not straight down but rather on an oblique or angled view. Think of it more like what you would see if you could look down from the base of your neck. During routine screening mammography, the MLO view is preferred over a lateral 90-degree projection because more of the breast tissue can be imaged in the upper outer quadrant of the breast and the axilla (armpit). With the MLO view, the pectoral (chest) muscle should be depicted obliquely from above and visible down to the level of the nipple or further down. The shape of the muscle should curve or bulge outward as a sign that the muscle is relaxed; the medial (middle) portion of the breast should be prominent in the MLO view. The nipple should be depicted in profile and a small stomach fold can be visible as a sign that the whole breast is reproduced. 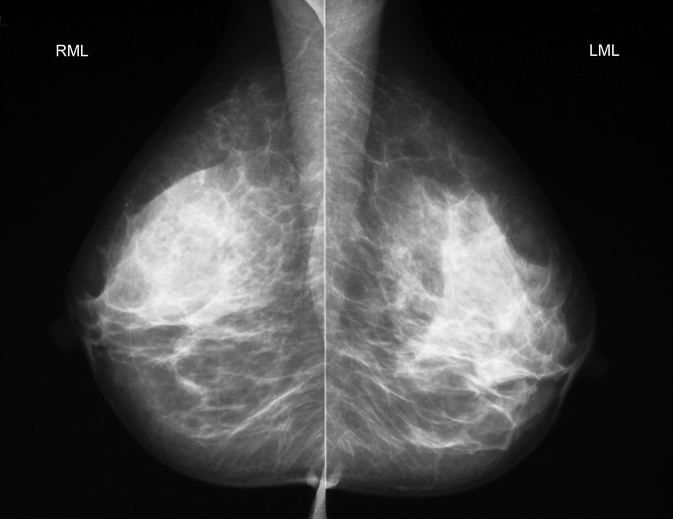 The Mediolateral View, also called the medio-lateral view or (ML), is taken from the center of the chest between the breasts, outward. If no oblique image is taken, this mediolateral angle may be preferable to the latero-medial view (LM). Why? Pathological changes are most commonly found at the lateral side of the breast, which in this case, is closest to the film. With a lateral view, the pectoral (chest) muscle should be depicted as a narrow light band on at least half of the picture. The nipple should be depicted in profile and a clear stomach fold should be visible under the breast. 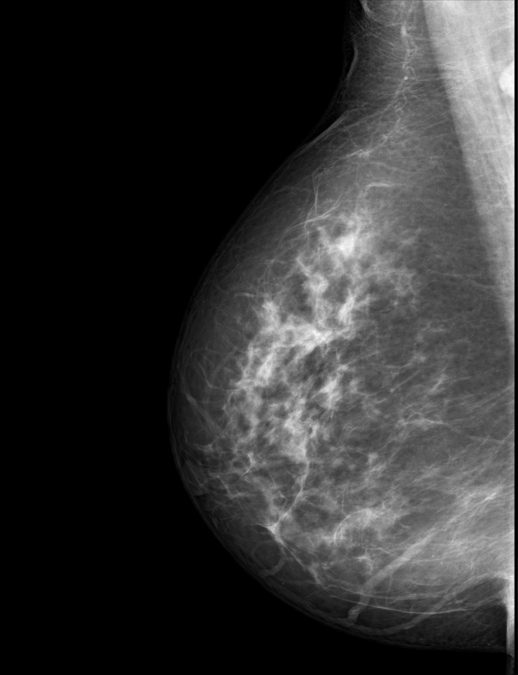 The Lateromedial View, also called the latero-medial view or LM, are images the breast from taken from the sides like the ML, only in reverse. In other words, the view starts from say where your arms would be looking in to the center of the chest. Think of LM as outside in and ML as inside out. When physicians want to include as much of the medial portion of the breast as possible, this LM view is frequently used. 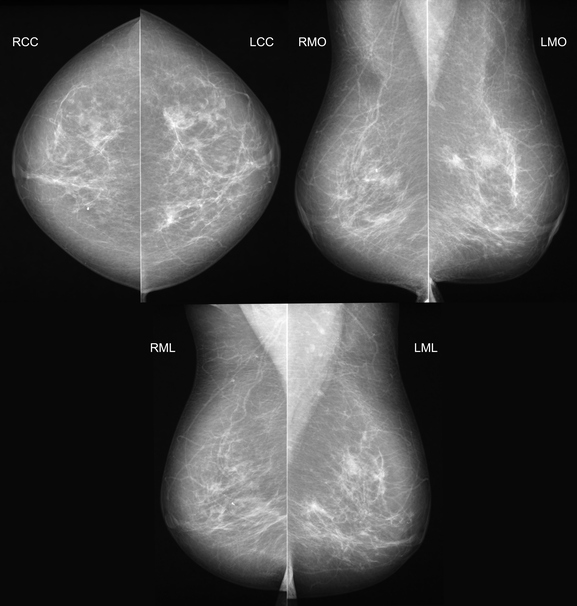 ABOVE: Three different mammogram views of both breasts on the same patient - CC, MO and ML. 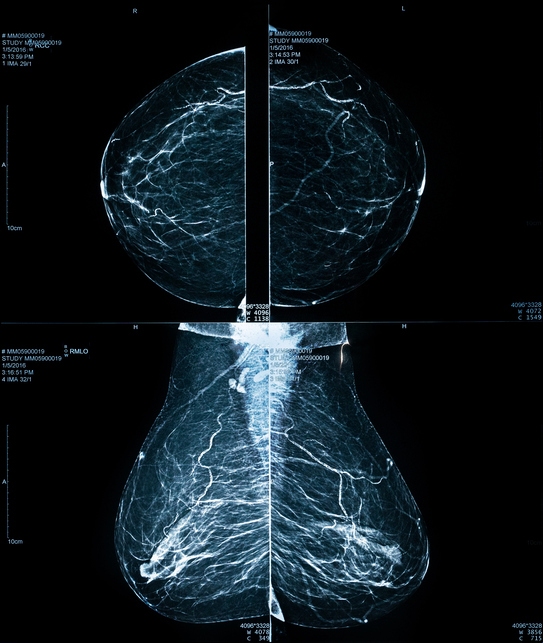 ABOVE: Two different views or angles of mammograms - Cranialcaudal (top) Mediolateral Oblique (bottom). Both are of the right and left breasts. Blue color has been added for enhancement. 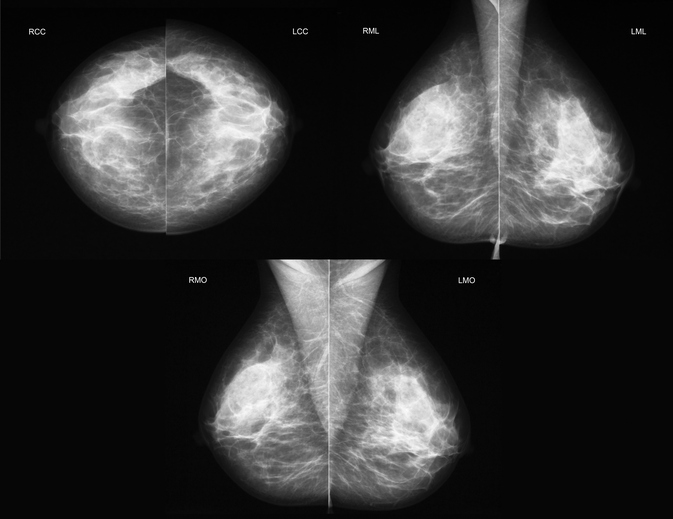 ABOVE: Three angles of mammograms - Cranialcaudal, Mediolateral Oblique and Mediolateral view - of both the right and left breasts.


Views or Angles of Mammograms