Xrays are safe, very routine procedures. But it's better to be informed on any of the risks.

What are the risks of getting an X-ray?

X-ray equipment and tests are relatively inexpensive and widely available in emergency rooms, physician offices, ambulatory care centers, nursing homes, chiropractic offices and other locations. Therefore it’s very convenient for both the patient and the physician. And since X-ray machines can also be portable, it is especially useful in emergency situations. However, there are some risks associated with X-rays.

However, even with state-of-the-art x-ray systems that tightly control x-ray beams with significant filtration and dose control methods to minimize stray or scatter radiation, many patients still worry that X-rays aren't safe because of the exposure to any radiation. Decades of research now show that the actual amount of radiation you're exposed to during an X-ray is usually so small that the risk of that type of extreme damage to cells in your body is extremely low. But how low is low?

During a single X-ray procedure, a small fraction of the x-rays, or photons, pass right through the part of the body being examined. The remaining photons are absorbed by tissues in the body. The energy of the absorbed photons can break apart or ionize compounds, and this is the part of the process that may cause cell damage. It should be noted that most cell damage after an X-ray is soon repaired. However, some is permanent. So how much cell damage can be done?

Most experts feel that this low risk is largely outweighed by the vast amount of benefits from information gained from appropriate imaging. X-rays are monitored and regulated to provide the minimum amount of radiation exposure needed to produce the image.

National and international radiology protection councils continually review and update the standards used by radiology (X-ray) professionals. State-of-the-art x-ray systems ensure that the parts of a patient's body not being imaged receive minimal radiation exposure. And qualified X-ray technicians utilize special care and procedures during any x-ray examination so the lowest radiation dose possible is given.

In some people, the injection of contrast medium for certain radiology can cause side effects such as a feeling of warmth or flushing, a metallic taste in the mouth, lightheadedness, nausea, itching or even hives. Rarely, severe reactions to contract medium occur, including severe low blood pressure, anaphylactic shock or cardiac arrest. Different types of X-rays require different preparations. Ask your doctor or nurse to provide you with specific instructions and follow them exactly.

If you are pregnant or suspect that you may be pregnant, inform your doctor before having any form of X-ray. Though the risk of most diagnostic X-rays to an unborn baby is small, your doctor may consider whether it's better to wait or to use another imaging test, such as ultrasound. 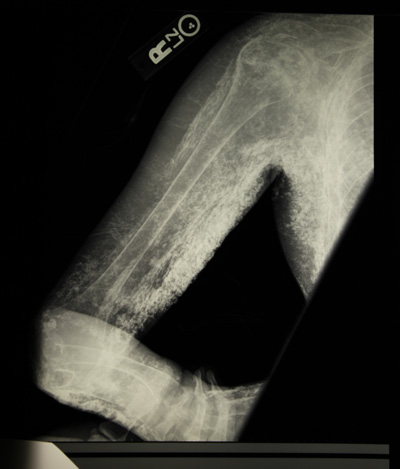 ABOVE: X-ray of arm and elbow. 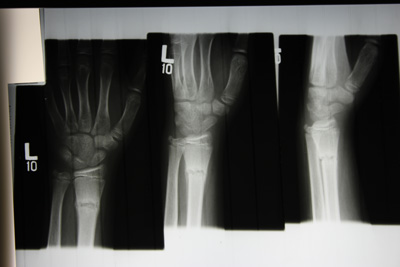 ABOVE: Forearm X-ray of a fractured ulna. 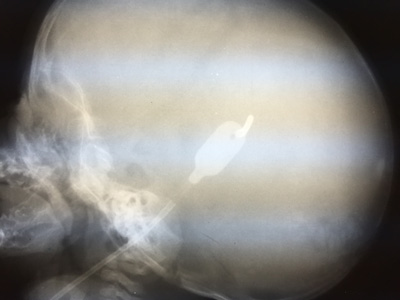 ABOVE: Frontal X-Ray of head with ventricular shunt.